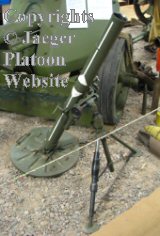 Finnish use (for all 82-mm mortars): Finnish Army captured 63 Soviet 82-mm mortars during Winter War and 15 of these were re-issued to Finnish troops. Later during Continuation War additional 415 mortars were captured, but they seem to have been re-issued in only limited numbers. This may have been due to ammunition - only available source for 82-mm mortar ammunition was captured ammunition and while 81-mm mortar shells could be used, using them resulted shorter range and poor accuracy.

The Soviets started development of their medium mortars by copying 81-mm Stokes-Brandt mortar and re-calibrating it to 82-mm calibre - the resulting weapon was called 82-BM 36 (82mm battalion mortar model 1936). However they did not stop there, instead they launched development work, which lead introducing of their own 82-mm mortar design already a year later. This new mortar (82-BM 37, in other words 82-mm battalion mortar model 1937) had several new features. Most important of these were new circular base plate (Brandt-Stokes and Tampella base plates for 81-mm mortars were all rectangular) and recoil springs added between the barrel and bipod. The recoil springs added to the design reduced stress on the bipod during shooting and lessened the need to re-lay the mortar during prolonged shooting. 82-BM 37 proved successful weapon, which had slightly longer range than typical 81-mm mortars of World War 2. The next version of 82-mm that the Soviets developed was 82-BM 41, which instead of conventional bipod had wheels and axle to support the barrel. Muzzle cap in muzzle of the mortar barrel was intended for pulling the mortar manually. While the wheels and muzzle cap made towing the mortar by hand easy to just a few men, this design proved to be a seriously flawed. Balancing the mortar correctly when it was laid proved very difficult with the wheels as support points and while the base plate dug itself to ground during prolonged firing the wheels did not - hence gradually effecting to aim of the mortar. The last and ultimate version of Soviet World War 2 era 82-mm mortars was 82-BM 43, which had the wheels attached to conventional axle, in middle of which was elevating standard, which was attached to mortar barrel with a barrel collar of sort. In addition to wheels the axle had also two metal shoes, which were used to support the mortar during firing. The muzzle cap introduced with BM 41 was retained also in BM 43. Unlike its predecessor 82-BM 43 proved highly successful and remained in Soviet use also after World War 2. During World War also German military used captured Soviet 82-mm mortars in large numbers and often used 81-mm mortar ammunition with them, even if this reduced accuracy considerably. German naming system called these mortars 8.2 cm GrW 274/2(r) (BM 36), 8.2 cm GrW 274(r) (BM 37), 8.2 cm GrW 274(r) (BM 41) and 8.2 cm GrW 274(r) (BM 41). Chinese 82-mm mortar type 53 is copy of Soviet 82-BM 37 mortar.

Finnish Army captured its first 82-mm mortars during Winter War. The total number of 82-mm mortars captured during Winter War was 63, but only 15 of these were re-issued to use of Finnish troops during it. During the months after Winter War the number of captured 82-mm mortars continued to increase when damaged captured mortars were repaired in Tampella and some hidden by the Soviets may have been found only after the war. By 12th of June 1940 number of captured 82-mm mortars in Finnish Army inventory had reached 78 mortars. Additional 415 mortars of this calibre were captured during Continuation War, the large majority of them in year 1941. By large margin the most common of Finnish-captured 82-mm mortars was 82-BM 37, which Finnish military named 82 Krh/37 (82 mm mortar model 1937). Also small number of 82-BM 36 (82 Krh/36) were among the captured mortars and likely at least few 82-BM 41 (82 Krh/41) were captured by end of Continuation War. It seems that captured 82-mm mortars saw only limited frontline-use with Finnish Army - for example 1st of June 1944 Finnish Army inventory contained 460 of these mortars, but only 69 of them were in use of frontline-troops while almost 200 lay in storages of military districts. The likely reason for so few of these mortars being re-issued to Finnish combat formations was their ammunition. Finnish industry did not manufacture 82-mm mortar shells and Finland did not buy them from anywhere else either. Hence only two possible methods for their ammunition supply existed:

During World War 2 Finnish company Tampella not only repaired damaged captured mortars, but in case of 82-mm mortars also manufactured spare-parts for them to use of Finnish military. Besides original Soviet mortar directors (sight) during World War 2 the Finns introduced their own mortar director design for these mortars. Both Soviet and Finnish mortar directors used by Finnish Army had lateral alignment division of 6000 mils and elevation settings from 45 degrees to 90 degrees. But the Finnish director had its elevation settings also divided to 0 - 750 points. Generally speaking short retreat phase and hard battles of summer 1944 proved most costly to Finnish Army in losses of heavy weaponry. But as shown by the chart below the small number of 82-mm mortars in use of Finnish frontline troops resulted also to only few of them being lost during the most active month of summer 1944.

Source materials used for making these mortar pages listed on bottom of MINETHROWERS AND MORTARS PART 7.